The last session had the car running a little better, but still it would pop and backfire if it was revved up much above idle.  Too rough to risk a drive around the block.

I replaced the plugs, which took me hours because I got to learn what wrench combos work around these headers. After all that, It wouldn’t start. Cranked and cranked…nothing. Put the battery charger on for a while and cranked some more…nothing…KA-BOOM!!! Huge backfire out the mufflers that blew craters in the gravel driveway. Scared the crap out of me, and my wife came running out expecting to see I’d blown myself up with the car.

So I pouted for a while and took care of some electrical jobs (grounds, splice repairs, removing extra wiring) while I thought about it some more. The only thing I changed was the plugs…and they were gapped the same as the old ines at .045. I started checking out the HEI wiring and found a suspect…

Turns out PO did a cheezy splice to the HEI power feed wire. Not only was it a bad splice, it was spliced onto the original resistance wire that used to power the points. It was only getting 7-8 volts…surprised it ran as well as it did. 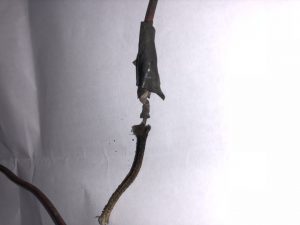 Ran a nice new 10ga to the firewall plug… 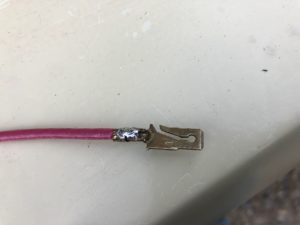 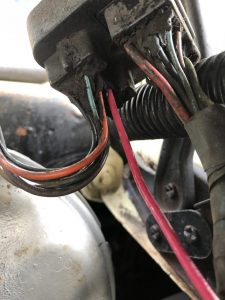 …and now it starts with a touch of the key, and no more popping or backfiring at 1200+ RPM. Smoooth!!!

Haven’t touched the carb aside from spraying it with gumout last weekend. Will probably do the rebuild anyway, but at least now it runs well enough to get it over to the exhaust shop to get mufflers on it so I can get it inspected.

The car ran but ran really rough when I got it. Had to crank for a while to get it to start, and it would pop and backfire if you ran it much above idle. The mufflers both have fist-sized holes in them, so it’s probably not the first time it’s backfired.

The timing was waaay advanced, off the top of the tab at idle with the vacuum advance disconnected…probably 18-20* or so? Pulled that back to about 8 initial, and verified the mechanical and vacuum advance was working.

Adjusted the valves a bit conservatively to make sure they weren’t staying open from too tight lash.

Sprayed a bunch of gumout in the carb and that seemed to help…so I ordered a rebuild kit.

Adjusted the idle speed and mixture, and verified the electric choke is working properly. idles pretty smoothly now, but still popping and backfiring when I get above 1200 or so.

Siphoned as much as I could out of the gas tank, didn’t look bad. The fuel gauge seems to be working too… I put in a couple of gallons of fresh gas and a splash of sea foam.

I was bummed it wasn’t running better so I figured plugs were due for changing too. Local auto parts place didn’t have plugs in stock for it (really!?!?) so they put in a warehouse request.

The headliner looked OK, but…there was a mouse hole in it, so…it had to come out.  It’s a good thing I removed it because there was a huge mouse nest in the between the headliner and the roof.  After removing that, I hosed everything down with Natures’ Miracle to kill the smell.  It’s starting to not smell like mice…

After removing the headliner, I discovered that there were wooden shingles wedged in between the roof frame and the skin.  it also looked like there had been a sunroof installed, and the hole had been patched up.  The vinyl roof was probably added to hide the repair on the outside.