I had put a new water pump on just before the July show, but I rushed the job, and there was a leak between the water pump and the block on the LH side.  The leak meant that  the coolant level was dropping, and the system would not hold pressure, so the temps climbed.  The fix was to pull the water pump back off again, clean everything up, and reinstall it with new gaskets.  While the system was drained, I decided to replace the old heater core hoses also. 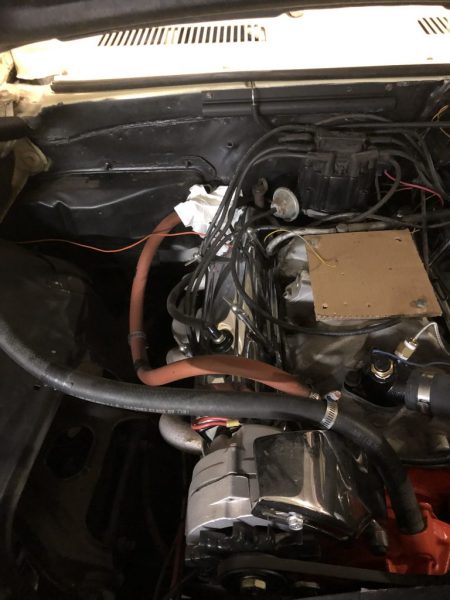 I’ve switched the front accessory mounting brackets over to 1969+ style, which isn’t original, but is a much better arrangement than the 67-68 setup.  The earlier setup has the alternator on the LH side supported by a long thin flat bracket.  I always thought it looked awkward and not particularly secure.  For the 1969 setup, the alternator has a much beefier bracket that attaches on the RH side.  The water pump and power steering brackets are different also for the newer setup.

The heater hoses are attached to a bracket on the alternator bracket, then they go through another bracket on the inner fender, and then over to the heater core.  I wasn’t really concerned with originality, but as it turned out, the restoration-correct hoses were actually cheaper than the generic ones, so I went with those.

I really hate working with plumbing on cars.  No matter what I do, I always seem to end up with a big puddle of something on the garage floor.  I put a tube into the radiator and siphoned out all of the coolant into a bucket.  Then I started unbolting things, and when I got to the water pump…a bunch of coolant drained out onto the floor.  I put the hose into the block and siphoned out even more coolant.  That seemed to do the trick, until I disconnected the heater hoses from the heater core, and…more coolant drained out.  <sigh> 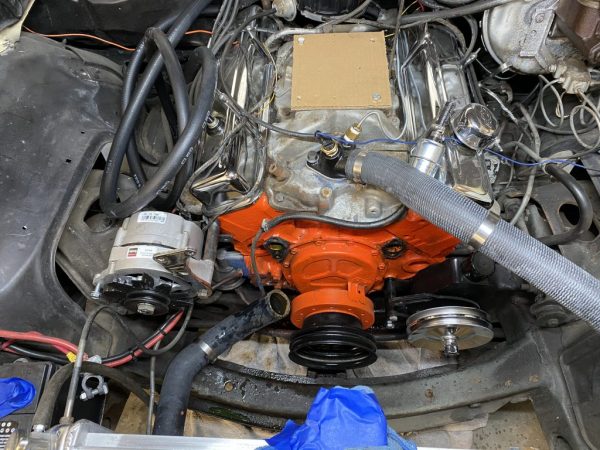 Once I got everything disassembled, I cleaned up all the surfaces, put new gaskets and RTV on, and bolted the water pump back on.  This time I let it sit for about a week before continuing.  Partly because I wanted to make sure the RTV was absolutely completely set, and partly because I was busy with other things. 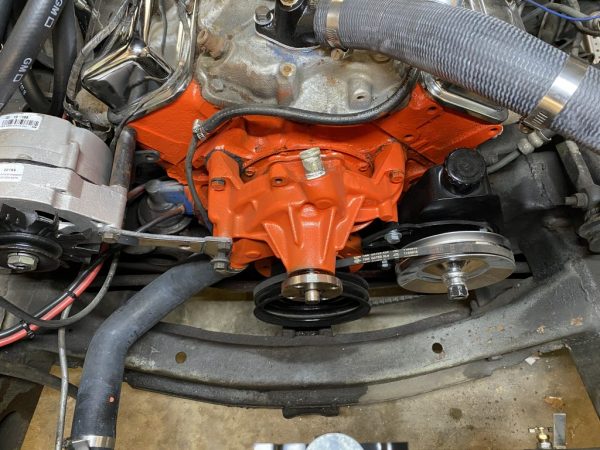 The last part of the refit was installing the new hoses and the hose brackets.  The alternator bracket is the 1969+ design, but it is a chrome aftermarket one, so I had to drill a hole in it to attach the hose bracket there.  The other hose  bracket is on the inner fender.  I bought these hose brackets new from a restoration vendor.  The fender bracket didn’t want to stay in the square hole in the inner fender.  I did some digging and found that the trick is to open the bracket, and put the clip in the hole with the bracket flush against the fender.  Then take a pair of pliers and squeeze the clip from the inside of the bracket with some pliers.  That pinches the inside together, and forces the outside of the clip to spread out and attach firmly to the fender. 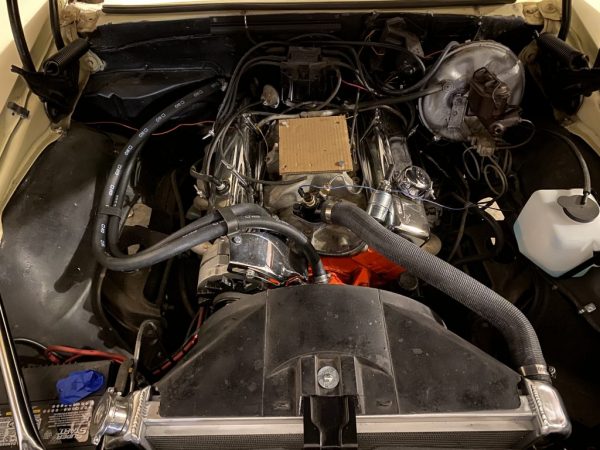 After everything was reassembled, a short test drive showed no leaks, and the temperature stayed right at 180*.  A successful fix.